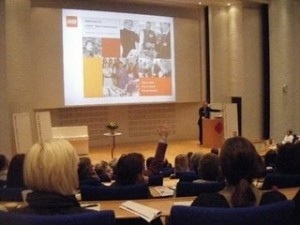 The theme of this year’s amazing LEGO IDEA conference was ‘play to learn, play to create, play to innovate’. The opening address by LEGO CEO JorgenVig Knudstorp reinforced this theme as he spoke on what is ’systematic creativity’.He said that LEGO itself is about creativity but there is also a system to it as things need to be put together. There are 1000’s of bricks in different colours and shapes and everything is thought through in a very deliberate way.

In order to move organisations forward, you need both the “hard and the soft” – you need to be able to manage the paradoxes of both the emotion as well as the hard stuff. LEGO ensures that we bring both the play and storytelling as well as logical thinking and mathematical structure into problem-solving.
This is why LEGO is so vital in childhood development – we are enabling children to be creative in finding their own solutions. LEGO is as important in the business world as we learn more effectively through fun and play and igniting our inner urge to create.
We learn far better as adults and as children if we create something ourselves and if we become self-directed learners who can transform our understanding of systems.
Playing with LEGO encapsulates the full spectrum of being scientific and at the same time artistic. Sytematic creativity is defined as:
Using logic and reasoning alongside creativity and imagination to generate ideas that are surprising and new.
If we frame things in a positive way, we will see endless possibilities. LEGO means play well and encourages us to deliberately practise systematic creativity. It is an open system with infinite possibilities and becomes in this sense a social tool that fosters collaboration and the establishment of connections.

Danish artist Olafur Eliasson then reinforced this theme as he spoke about how creativity leads us not only to ask how things are done, but also why things are done. Often when we play, we lead ourselves into the ‘why’ and particularly when things are 3-dimensional we are led to behave differently.
Eliasson who is world renowned for his installations in the TATE modern gallery and in cities all over the world, sees systems as embracing both individuality and collective collaboration.LEGO Idea Conference 2

David Gauntlett, Professor of Media and Communications at the University of Westminster, emphasised the importance of making things in order to become more engaged with the world. People want to make their mark on the world – you see this as staff make their work cubicles uniquely theirs or as people bring up children in a positive way.
People also want to be social and make social connections.
All of this explains the power of LEGO – it is about making things and sharing meaning around what has been made. This is the antithesis of the ’sit back and be told’ culture. Playing with LEGO is hands-on and minds-on. It takes away the fear of making mistakes. We don’t want to hand solutions to the next generation – we want to give them tools to make them feel part of the world. We want to be able to stimulate their creativity to create a better world.

Mikkel Vahl of LEGO Education reminded us that several years ago MIT University was experiencing a 50% drop-out rate of students in their first year. As soon as the curriculum changed to becoming more hands-on, this drop-out rate came down dramatically.
When we ask people to find solutions themselves, when we ask open-ended questions, we set the stage for innovative possibilities. 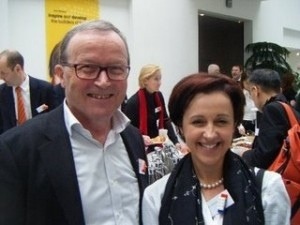 Thanks for this summary to our Australian Community Partner, Denise Meyerson from Management Consultancy International, pictured here with Kjell Kirk Kristiansen, Owner of the LEGO Group.